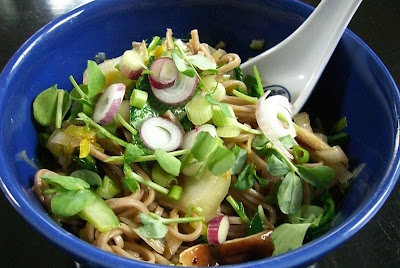 It's that time of the month again - time for a link to a recipe from a June issue of Gourmet magazine. This month I made Soba Noodles with Pea Shoots, Shiitake Mushrooms, and Leeks from June 1994. I love soba noodles both for taste and health - other than the sodium in the soy sauce, this is a healthy dish, full of delicious vegetables and hearty whole grain soba noodles.

In addition to the vegetables called for in the recipe, I added one head of baby bok choy, cut up a little, to the leeks in the pan. Baby spinach or other greens would work equally well. I also added about a half cup of chicken stock (you could easily use vegetable stock) to the pan and let the leeks and bok choy braise a little. This added a little extra "sauce" to an otherwise rather dry dish. And, I added about a quarter cup of water to the soy sauce and vinegar mixture for the same reason. The result was a cross between a straight noodle dish and a soup. Lastly, I gave the pea shoots a rough chop before putting them in the colander.

As the guys in the house were out practicing their short games for a charity golf tournament, my lovely daughter and I enjoyed this for lunch without them. For her, the mostly vegetarian meal worked well. However you could easily add a small piece of salmon or some shredded chicken on top of the noodles for a heartier dinner.

Here's the link:
http://epicurious.com/recipes/food/views/Soba-with-Pea-Shoots-Shiitake-Mushrooms-and-Leeks-12060
Posted by Wendy at 5:13 AM