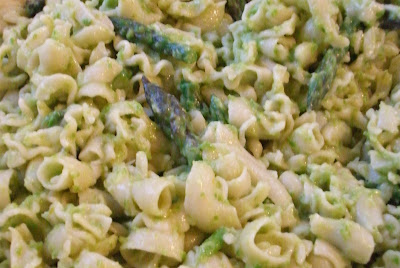 Last night I made my recipe from a May issue of Gourmet. This one was from 2000,which it's hard to believe is ten years old already.

Each month, I start searching for the recipe I'll test for Gourmet, Unbound by going to my shelf of old issues, and checking for pages I might have tabbed back when I first received that magazine. This month I decided to try one of the recipes I'd tabbed in 2000. I checked the recipe on Epicurious.com and found a range of reviews. Some reviewers loved the dish, and others thought it was bland. After testing it out last night, and enjoying the light, yet distinctive flavor, I think I've figured out the problem some of the reviewers might have had. It's possible that those who thought the dish was bland just didn't have really fresh asparagus. I was lucky that this is the beginning of high asparagus season in this area so I had asparagus fresh from the fields via the farmstand. I wonder if the Mexican or Peruvian imports have as much flavor.

Surprisingly, this dish does not overwhelm with the taste of asparagus. Even the less exuberant asparagus eater in my house enjoyed the dish. The lemon (I used one of my last Meyer lemons) lightened the flavor perfectly, though I added a little lemon juice - probably 1/2 lemon's worth - at the suggestion of many of the reviewers. The sauce is silky due to the addition of the pasta cooking water and, apart from the white pasta, is relatively healthy. It's mostly vegetable based with a hit of olive oil and parmigianno reggiano. I reduced the olive oil slightly from the recipe with no ill effects. I used three tablespoons of olive oil instead of a quarter cup.

The dish appears so simple with its brief ingredient list, but there are several steps to the process that you need to plan ahead for. Prep the asparagus, zest the lemon, and most importantly, put that water up to boil right away - you need to boil the pieces of asparagus spears for six to eight minutes (which I thought seemed a little to much so I reduced it to four or five minutes), and then blanch the tips, before you cook your pasta in that same water. If I wasn't also preparing a salad and a salmon dish to go alongside, it probably wouldn't have been a problem. When I make this next, I would not concurrently prepare something that requires last minute attention, as this is an of the moment sauce that should be served immediately.

Click here (http://www.epicurious.com/recipes/food/views/Pasta-with-Asparagus-Lemon-Sauce-103382) for the recipe at Epicurious.
Posted by Wendy at 8:44 PM