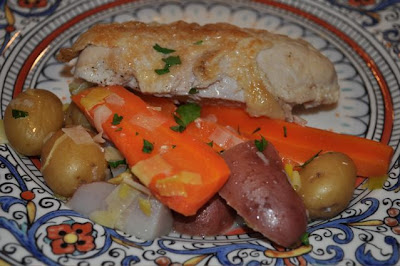 Valentine's evening proved to be the perfect time to try out my March Gourmet recipes. We had family visiting from out of town for President's weekend and we were nine for dinner - four adults, my two teens and my nieces and nephew who are 11, 8 and 5. I ended up making two recipes from different issues of March Gourmet magazines, both of which were delicious and perfect for Valentine's dinner.

The first, Chicken in Riesling, was from 2008 (find the recipe here). I had made this once before back in September or October and moved it into the "keeper" file as all four of us liked the dish. It's rich without being heavy as a result of the lighter touch of the creme fraiche (!) and lemon juice. It's a one pot meal with carrots and potatoes cooked right in with the chicken and Riesling. The header notes to the recipe say that it's just another chicken in wine stew, like a coq au vin.

I simplified a little, as you all know I have a hard time leaving a recipe alone. I cut the butter, and used olive oil for the leeks, but added in a tablespoon of butter into the stew at the end for richness. I also used cut up chicken pieces instead of the whole chicken. I used a mixture of breasts, thighs and legs, with extra legs for the kids. I used more than the equivalent of one chicken this time, as there were so many of us. Lastly, I used a mix of some really lovely, tiny little yellow potatoes I had purchased for heaven knows what a week or so earlier, and some cut up baby red potatoes to fill in. Only downside? My brother-in-law thought the tiny potatoes looked enough like olives that this usually hearty eater took a rather petite serving of this dish. Once every one had been reassured they were potatoes, everyone dug in. You can see from the photo that he was justified in his confusion.

This is not close to the health quotient of the quinoa/bulgur/lentil dishes I also love, but this would make a great meal for company or a special occasion. It's just rich enough that you simply can't overeat, but light enough that you don't feel like you need an immediate angiogram. The sauce is compelling, silky from the creme fraiche and dab of butter and with that tangy hit of lemon. The recipe says to add the lemon juice to taste and I ended up using 2 tablespoons.

This is lovely with a baguette as you will want to sop up some of the sauce. You don't need to serve any other vegetable, but if you like, a salad with a touch of lemon juice in the vinaigrette would be a nice complement. We drank more Reisling with dinner.

Later, the adults enjoyed some Kir Royale Sorbet from March, 1994 (find the recipe here), while the kids had ice cream sundaes. The vivid red color of this sorbet makes it the ideal Valentine's day dessert. Plus, it was light and tart after the chicken. I used frozen raspberries as there are no domestic raspberries available in our DC area markets this time of year. 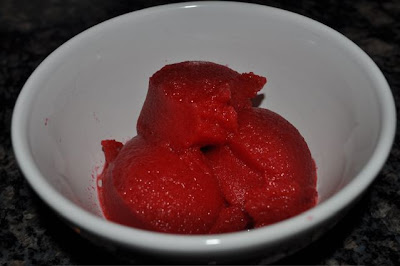