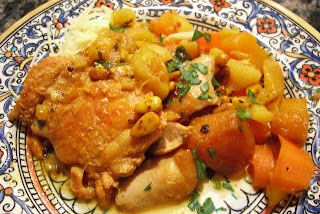 As I did in January, I am participating in the February roundup on the blog Gourmet, Unbound, a forum for bloggers and Gourmet devotees to honor the now defunct magazine by cooking a recipe from a February Gourmet from any year. This month I chose an Algerian tagine made with apricots, orange marmalade and spiced pine nuts from February, 2008. Though the dish itself is a little sweet, the spiced pine nuts balanced that pretty well so it wasn't cloying. Everyone seemed to enjoy the dish. Ideally, I'd serve this with whole wheat couscous.

This dish is not too far off from the basic parameters of healthierkitchen. To ramp up the health factor, I added some cut up carrots and butternut squash (which I purchased already cut up at Trader Joes). I also omitted the butter, but it's not such a big deal with this recipe as it calls for only 1 tablespoon for the whole dish.

The largest change I made, apart from adding the vegetables, was to use about 2 pounds of boneless, skinless thighs in lieu of the whole chicken. Because I didn't have the bones to make the broth richer, I added chicken stock instead of water later on. I added about two cups of stock instead of the the 1 cup of water, as I had added a mound of vegetables.

Here's the link to the recipe: http://www.epicurious.com/food/views/Chicken-Tagine-with-Apricots-and-Spiced-Pine-Nuts-241506
Posted by Wendy at 8:56 PM